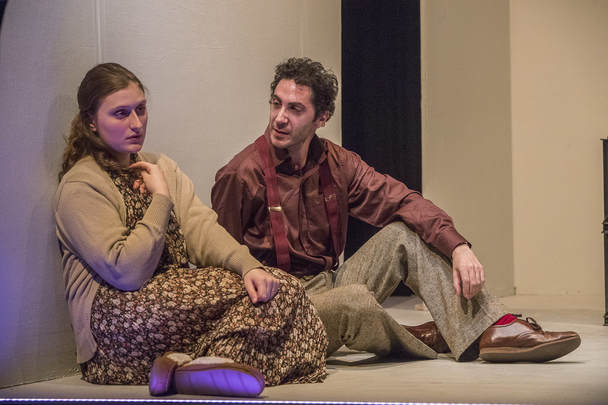 David begins by wanting to provide better housing for the residents of Basuto Road, a so-called “Twilight Area” (read: slum) of South London, and later aims spectacularly high to try and capture his legacy as a leading architect of the socially progressive times.

As the drama plays on, tensions are fueled, as David’s plans are thwarted again and again. He becomes more zealot-like, while
his design concept reaches epic proportions: two skyscrapers -
“The highest residential buildings in Europe!”

Director Diane Howden noted there were foreshadows of the June 2017 tragedy when a fire broke out in the high-rise residential Grenfell Tower in West London, that audiences may potentially infer. In Frayn’s script the social justice themes serve more as background for the interplay between the four characters. It is the changing fault-lines in their relationships that create the drama.

While David grows more driven, he remains kindly optimistic, enabling the co-dependent relationship that festers between Jane and himself, and their financially struggling counterparts: Colin and Sheila. Sheila’s transformation from a dominated wife to high-functioning, and yet a quietly menacing presence within David and Jane’s home, is echoed by her physical appearance. Marisa Newnes’ costuming for Sheila changes from dowdy brown to greens and blues, as Sheila appears to blossom under the care of David and Jane.
In Diane Howden and Ian Ackland’s split-stage set, the warm hues of Jane’s intimate 1960s kitchen starkly contrast the bare greyness of Colin and Sheila’s cheap lodgings. Clever use of lighting also depicts changing time zones, and circumstances, and, at one point - a very English telephone booth!
The soundscape is ambitious, with music from The Beatles, Pink Floyd, The Doors, and Bach (among others!) - evoking time, place, and mood. It is sometimes a little distracting, as the players’ keenly observed characterisations are enough to sustain the mood.
​
Strong performances from all four actors are key in communicating playwright Frayn’s often troubling insights into the power dynamics inherent in helping others. The audience is left questioning who is helping whom? And why? As Sheila is empowered to help others, the always-generous Jane begins to appear helpless in her own home. Is David truly motivated by altruism or ego? Is the cynical Colin operating from “public spirit, jealousy, or pique”? The character of Sheila is more enigmatic. As Act Two ends, everyone else has somehow evolved, while Sheila is still searching for happiness.
Benefactors plays until May 26, 2018