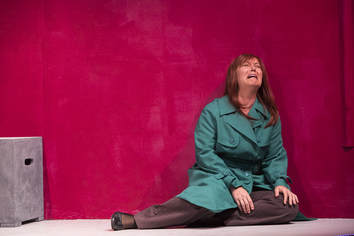 Vengence without vindication: Judy Jankovics as Rhonda. Photos by Ben Townsend @btphotography
This 2007 Australian play by Robert Hewett  builds in power as each new monologue reveals more information about seemingly unconnected events. The production is exciting, it's fresh, but it’s heavy - when intermission rolled around the full-to-capacity 84-seat theatre was quiet, as the audience processed the drama that had just unfurled before them.

The set is minimalistic, leaving the stage open for the actors alone to bring the story to life.

As the pace quickens during the second and third monologues, we glean the different characters are somehow interconnected. Throughout the play, skillfully crafted characters speak to us from their hearts (or lack thereof), and each monologue almost stands alone.

Act One introduces Rhonda, the redhead. Judy Jankovics’ portrayal is painfully real. Frustrated suburban housewife, Rhonda, has been through the wringer after a messy separation from husband, Graham. There’s much wry comedy in Rhonda's response to her marital woes, but tell-tale signs hint at the full tragedy of the situation.

Enter Alex (Faith Jessel), an altruistic, no-nonsense doctor, with a clipped British accent, controlled and controlling, but masking an unspeakable grief. There’s a distinct moment the medical practitioner persona drops, and the woman, in all her human brokenness is revealed.
​
Soon after Rhonda’s interfering best-friend Lynette swanks onto stage, with a cask of wine, and her story. This role is surprisingly also played by Faith Jessel, and you’ve got to wonder how Jessel made the 60 second transition backstage to bring forth such a different performance.

Jan McLachlan's colourful costumes also enhance the characterisations.
​
Act One ends dramatically with a monologue by four-year-old Matthew, played by Murray Fane, who poignantly captures the innocence and body language of a small child.

By Act Two, it appears some of the characters haven’t been completely honest. We finally meet the philandering Graham (Murray Fane), who turns out to be far more unpleasant in the flesh.
As the much-spoken-of femme fatale, Tanya (Faith Jessel, sporting a lustrous blonde wig), wraps up her monologue she exposes the underbelly of the play:

Each monologue is pertinent to the plot, though the pace slowed at the end of Act Two. To be fair, in the last two monologues by the elderly Joan (a whimsical characterisation by Judy Jankovics), and Rhonda, there are moments of introspection, which contain the possibility of redemption for some. This leaves the audience with an appreciation of how giving some of the characters actually have been, and just how awful others have been.
The Blonde, The Brunette & The Vengeful Redhead plays until March 10, 2018