Biggins served as an Australia Day ambassador, and his experience inspired this satire about committees, which is also, in many ways, a study of what it means to be an Australian.

For the first matinee of Pymble Players’ Australia Day, the 84-seat theatre was filled to capacity.  At intermission one audience member was overheard commenting: “I’ve worked on lots of committees – this is so true!” 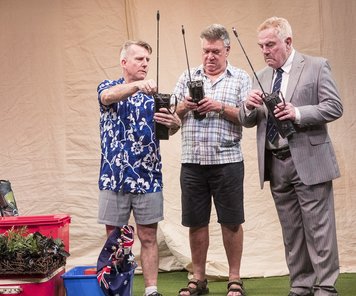 The trouble with technology: l-r: Rob White, Warren Blood, and Jim Burns. Photos by Ben Townsend of btphotography
Director Jan McLachlan’s casting is spot on. It’s difficult to single out any one performance.  Warren Blood as the blokey older Aussie battler, Wally Stewart, is thoroughly believable. Wally is loud, stubborn, and unashamedly bigoted. He has served 15 years on the Australia Day committee, is the antithesis of political correctness, and hearkens back to the misogyny of earlier days. As Australian-born Vietnamese school liaison Chester Lee (Lap Nguyen) remarks drily:

Lap Nguyen, as the “flamboyant but not gay” Chester Lee, presents an alternative lens on the traditional Australia Day commemorations. Chester, who admits he “drew the short straw” to participate on the committee, is a voice for the young, and refuses to be categorised as “the other” on the basis of race. Nguyen brings levity and energy with his characterisation.

Xenophobia, racism, mateship, hypocrisy, disability and gender issues - and even the limitations of technology - are all out on the table for debate and discussion in this play.
In Biggins’ script one-liners fly by thick and fast, and it’s a challenge for the actors to keep up the pace, but they did.

Reg Lunn's set design is simple, but authentic. In Act One it's a ubiquitous Scout hall, with a few honour boards, portraits of uniformed soldiers and Queen Elizabeth II, flags (notably, no Aboriginal flag), and a tiny kitchenette. For Act Two the stage is set for Australia Day itself, and the space opens up considerably. (The actors were also on hand to assist with the set change, and they went about this business in character).

Marisa Newnes’ costumes contribute colour and context. Greens politician Helen McInnes (Heather Pitt) breezes into meetings in bright flowing garments, as she continues to push for a catering option more exotic and inclusive than the standard issue sausage in a white bun.  As the ambitious Coriole mayor, Jim Burns’ character is infused with comic potential, and he hams it up on Australia Day, complete with all the mayoral frills – and cricket whites! Watch for the outfit Country Women’s Association president Maree Bucknell (Wendy Morton) dons for her turn in an interpretative “Indigenous” dance on the day.
Without spoiling the fun for future audiences, Australia Day indeed reaches farcical proportions. If you’ve volunteered on a committee, or if you watched the news in 2012 you may find Australia Day eerily familiar.