Eva Smith, a young factory worker in the north Midlands of England, falls into the latter category. As the Birlings, a wealthy industrial family, toast the engagement of their daughter, to the aristocratic son of a business rival, little do they expect a judgement day of sorts is upon them.
An Inspector Calls was written by English dramatist J.B. Priestley at the end of World War II. It is a play laden with irony, dramatic and otherwise. Throughout, J.B. Priestley repeatedly highlights the irrelevance of social ambition, and the hypocrisy of the upper classes, against the backdrop of two pending world wars, and a young woman’s death.

Helen Williams directs this polished Pymble Players’ period piece. The script is tightly crafted, and the cast of seven work together like a well-oiled machine.

The subject matter is sombre: 24 year-old Eva Smith has committed suicide, and all the people in the Birling drawing room are somehow linked to Eva’s death. As they congratulate each other on their impending successes, a curious police inspector arrives at the house, and nobody walks away blameless.

Inspector Goole (David Kirkham) is grey-suited and grey-whiskered, but commands the drama, from the minute he walks on stage. He is unlike any police inspector the protagonists have met before, and is - in their words - “rude and assertive”. But, as the drama unfurls, his generally tempered approach produces elaborate confessions from nearly everyone present.

As audience members, we are engaged by the people in the drawing room from the moment the lights go up. They are celebrating what should be “the happiest day of their lives”, and it’s about to go pear-shaped. 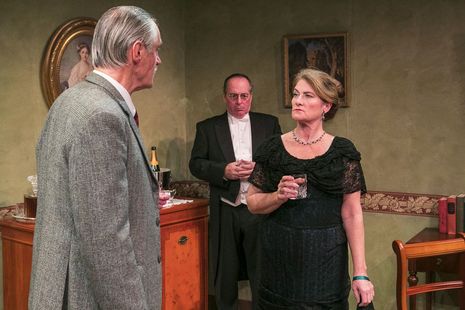 Probing for the truth: Inspector Goole (Dave Kirkham), Arthur Birling (Phil Lye) and Sybil Birling (Liz Lynch) Photography by Ben Townsend.
From the outset, there is an underlying tension between the landed aristocracy and the nouveau riche. Here is a family making a match which will (forbid any scandals arise) wed their fortunes with an established well-to-do family. There are other tensions too. Eric (Brett Joachim) the youngest Birling, obviously an outsider, clearly has a drinking problem. Joachim’s characterisation of the peevish Eric Birling is keenly observed.

As the pampered bride-to-be, Sheila, Samantha Lemon sparkles like her diamond ring, but she is nursing a grudge towards her charming, yet superficial fiancé Gerald Croft (Jack Douglas), who has been notably absent for a few months during their courtship.

Meanwhile the patriarch Arthur Birling (Phil Lye) loudly predicts there will be no conflict, on the world stage or locally, and all will be peace and prosperity.
​
“Every man must mind his own business and look after his own.” Arthur boldly declares.
​
It is a statement that will come back to haunt the whole family.